From Block to Bench!

One of Szerelmey’s specialities is unusual or complicated projects, or sometimes both! We have recently completed a really interesting project at Selfridges that has included a number of different elements, including the design, supply and installation of a bespoke bench and drinking fountain. The realisation of the bench and fountain has been the culmination of a long journey that involved a rigorous process of selection to find exactly the right marble. The specification was for a lively green and white stone, which was tough enough to endure external placement and heavy public use. One of the challenges was to find block that displayed enough colour but was also large enough to accommodate the very large dimensions of the bench, with no flaws or faults running through it.

The choice was narrowed down to two, Verde Lapponia and Verde Luana. Our team travelled to Italy to inspect the stone, and found the Lapponia displayed too much white and was not quite large enough in block size, so this was rejected.

There is only one Verde Luana quarry found high up in the mountains behind Quercete in a very rural location. The mountain road to get to the quarry was fairly treacherous and the last part of the journey was off road and on mountain tracks – certainly a trip for the dedicated and not the faint hearted. The small quarry exhibits Luana with red and green elements, which both appear in the same seam. This made the acquisition of a purely green and white block slightly more complicated, but the quarry owner was able to show us a block, pre-cut, large enough for the bench and exhibiting the right colour combination. To ensure the block would facilitate carving the bench, the bench profile was marked up on the block and this also allowed the Client to have a better understanding of the spread of colour and pattern across the piece. Once the Client and architect were happy the block was purchase and transported down the mountain to a factory just outside Carrara.

Here the block was worked using CNC cutting technology to achieve the organic shape of the bench. Following this, the surface was shaped by a hand held smoothing machine and then finally finished off with a hand held bush hammering tool to achieve the required surface texture. This whole process took approximately 5 months, before the bench was ready to be shipped to the UK for installation outside the new Selfridges entrance on Duke Street. Production of the drinking fountain was a much easier process given the smaller size of the piece. Since being installed both the bench and the fountain have caused quite a stir and been much admired by the general public.

Other work that Szerelmey carried out to the exterior of the flagship store was the design, supply and installation of a “stone carpet” outside the new entrance. This stunning feature, stone entrance was also relatively complicated in terms of the pattern and even more so to do with the slope of the ground. The strong geometric pattern is comprised of bands of azul Monica limestone and black granite contrasting with Portuguese moleanos limestone with a black granite perimeter. There is a large variation in levels between the store doorway and the pavement, the team solved this problem by working to a 3D model of the paving and introducing shaped paving pieces in strategic positions to avoid diagonal cuts.

Inside the store we laid new terrazzo flooring, sourced from Italy, across the new retail areas including staircases and have also installed Arebescato features and columns inside the store, which have been carefully vein matched on the corners to make the columns appear as though they were constructed from solid pieces. 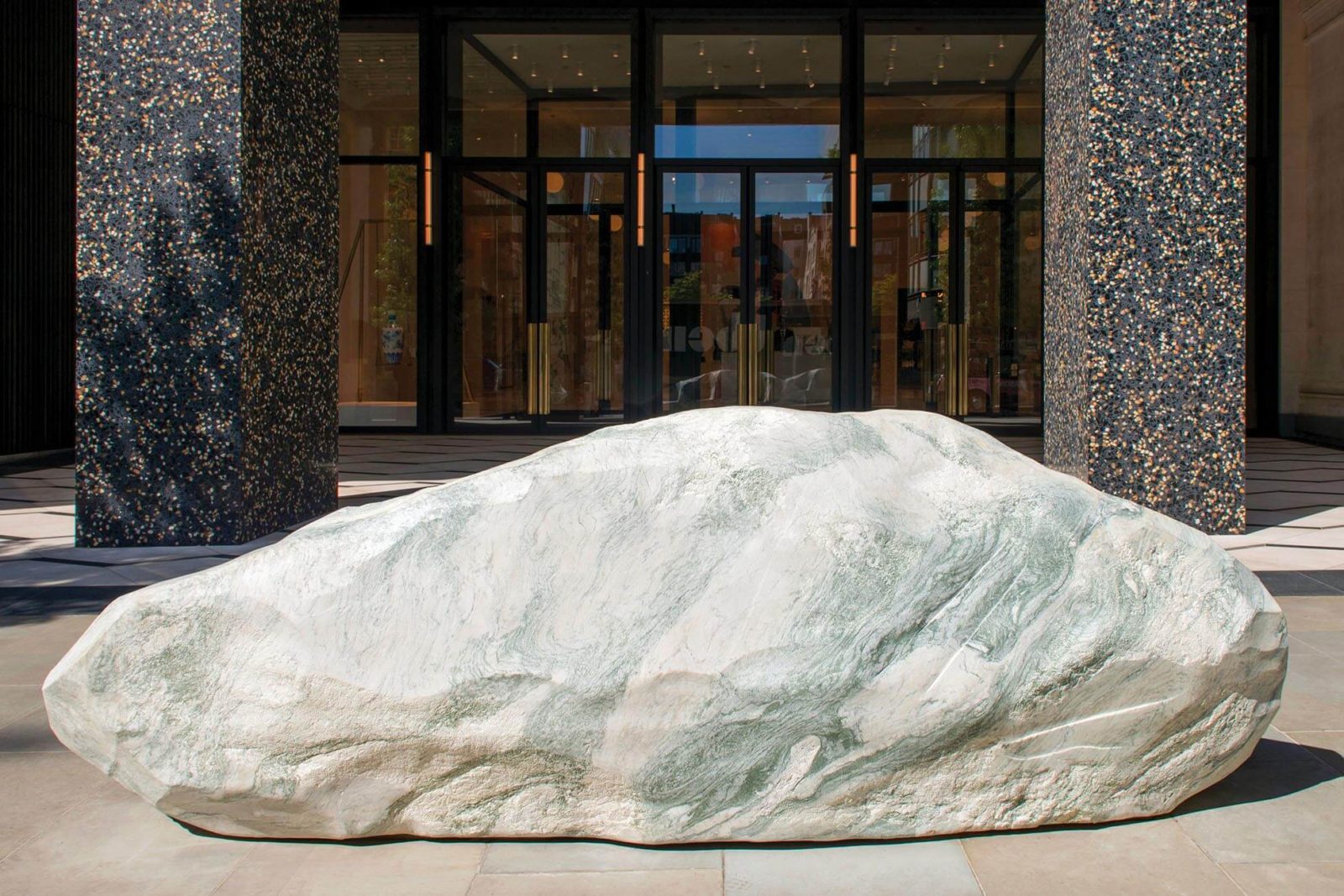