It’s National Apprentice Week 2022 and the theme will be ‘build the future’; reflecting on how apprenticeships can support people in developing the skills and knowledge required for a fulfilling career, and businesses to develop a skillful workforce that is equipped with knowledge ready for the future. At Szerelmey Restoration, we have some inspiring stories from our staff members, who started off as apprentices and are now in established roles.

The system of apprenticeship developed in the Middle Ages and was governed by the medieval craft guilds and local governments. The first attempt at formalising the system came about during the reign of Elizabeth I, when the Statute of Artificers was introduced in 1563. This decreed it to be illegal for anyone to “exercise any art, mystery or occupation now used or occupied within the realm of England and Wales except he shall have been brought up therein seven years at the least as an apprentice”.

Apprentices usually began their career at around 10 or 11 years old and invariably boarded or lodged with their Master. The Master often saw the apprentice as a form of cheap labour, while the apprentice generally aspired to become a Master Craftsman in time. The Statute of Artificers was finally abolished in 1814, thought to be a result of waning interest in apprenticeships due to general exploitation and terrible working conditions in factories. Apprenticeships in certain industries such as engineering, plumbing and electricals remained reasonably popular but even despite this by the 1990s overall numbers had dropped significantly. Since that time there have been various schemes and government initiatives launched with varying success, to try and encourage young people back towards apprenticeship training. In 2012 the Richard Review was commissioned by the government and led by former Dragons’ Den star Doug Richards, to make apprenticeships more employer-orientated. This set a ball rolling which has resulted in the current Apprenticeship Levy system, whereby employers pay a percentage of their total wage bill in, topped up by the Government adding 10%. It is up to the company to use this money to offset the cost of the apprentice.

Szerelmey has always been a big supporter of apprenticeships and our particular nature of business, restoration and new build stone masonry, very much lends itself towards this. As such we have had a long history of apprentices working their way through the company. Where apprenticeships have tended to focus on hands-on skills and trades, there are also opportunities for office-based training too such as quantity surveying and estimating. Training young people does represent a not insignificant time investment for companies so it is especially rewarding when apprentices choose to remain with the company.

Let’s hear from the team… How old were you when you started your apprenticeship with Szerelmey?
16 years old

And how many years have you been with the company now?
40 Years

Why do you think coming into the business as an apprentice is so beneficial?
I feel it is vitally important that apprentices are taught the correct methods for the applicable task including using the correct materials for the job in hand. It is important to learn all aspects of our trade and the modern apprenticeships tend to cover this. They not only focus on the practical elements of the chosen trade but also touch on other related trades i.e. our stone restorers would cover a section on stone cleaning as well as the stone restoration element. They also focus heavily on Health and Safety, including training such as First Aid, PASMA, IPAF and PPE related courses, all very important elements of our trade.

What do you think the major differences are of being an apprentice from when you started 40 years ago to now?
Back then it was City & Guilds which I believe focused more on the practical side than the current NVQ does. The courses tended to be a lot longer than the current NVQ with a lot of time spent in the classroom learning the practical elements. Nowadays the practical elements are learnt on site under the guidance of experienced tradesmen hopefully passing on their wealth of knowledge. My apprenticeship was in plastering which was at South East London Technical College. The college and Szerelmey had a close relationship where the courses were designed to specifically meet our requirements, for example, the tasks we had to undertake were modified where we carried them out using sand and lime as opposed to traditional plaster. Health and Safety back in the early 80s although vitally important, was only really just coming to the forefront.

What would be your advice to young people now who might be thinking about a career in construction?
Personally, I think starting as an apprentice is a great experience as you get to learn all aspects of the trade and gain huge amounts of knowledge. As a past apprentice with Szerelmey, and then moving into the management side, I have been passing on my knowledge and experience to the younger members of the team which has hopefully assisted their careers greatly. How old were you when you started your apprenticeship with Szerelmey?
I started with Szerelmey when I was 16, it was my first job after leaving school. I am approaching my sixteenth year with the company.

Why do you think coming into the business as an apprentice is so beneficial?
Starting your working life surrounded by skilled professionals really allows you to learn important skills and life lessons from day one. It gives you the opportunity to see how different parts of a business work and allows you to find your own strengths and weaknesses for personal progression.

What would be your advice to young people now who might be thinking about a career in construction?
I would tell them to work in lots of parts of a business and see what interests them the most. Waking up each morning in a job you love is a huge step to really carving out a lifelong career. I would also say take all the extra training and courses on offer as you’re never too old to learn and grow. Construction is fast paced and ever evolving, so keeping up with training and new processes can have long term benefits. How long has it been since you finished your apprenticeship?
3 years.

What aspects of the job do you like best?
I would have to say teamwork, collaboration, great communication, respect and opportunities.

What are your aspirations?
My goal is to educate myself more and become an expert in my work field.

What made you decide to join construction?
The thought of being part of a team every day was really appealing to me. I also like being creative and being hands on every day. The opportunity of an apprenticeship with Szerelmey was a fantastic opportunity.

What aspects of restoration works do you like and why?
I find it incredibly rewarding and satisfying restoring historic buildings back to their original condition. Chance to develop a new skill set. How did you hear about us?
At my previous job, a work colleague came across a Szerelmey advertisement for apprentices and suggested it to me.

How did you choose to become a trainee restorer? What is your previous experience?
I wasn’t sure what i wanted to do. I have done various jobs; worked with horses, as a bartender, at a leisure centre. Later, i was placed as a labourer through an agency for various sites. One of the sites was messenger conservation and restoration where i worked for 3-4 months, and that is where i started to develop a liking for restoration.

What made you decide to move to Szerelmey?
A work colleague saw the advert and advised me to apply as I was interested in getting proper training and qualifications in restoration. He said Szerelmey is a great company to work with and has a very good apprenticeship programme. They really invest in their employees to help them progress towards getting competitive industry specific training. I joined Szeremey restoration in February 2019 with a view to obtaining the gold card as a restorer. I have recently finished my apprentice training and now a qualified Restorer. 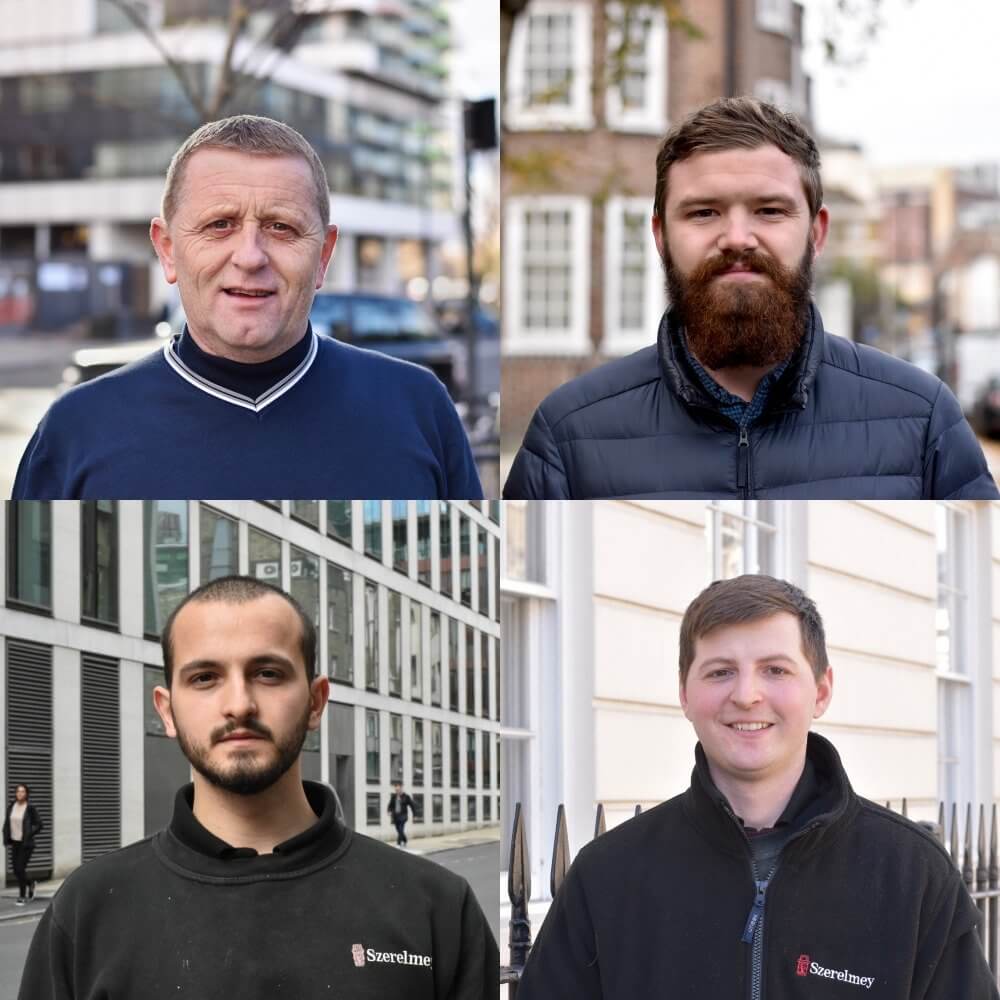